Imagine you want to invite two sets of people to enrol in a Moodle course. You want to place different limits on the enrolment numbers for each set. You can't use Moodle Groups in this case as it doesn't allow group-level enrolment caps (at least not in version 2.6). You can only place enrolment caps at the level of a self-enrolment method. So you'll have to create a self-enrolment method for each set of people. That's easy, but what if you want to extract users who joined the course using each method and perhaps do further analysis? It's easy to see these lists using the filters available in Users -> Enrolled users, but you can't download them (at least not in Moodle 2.6, which I use).

This is what you can do:

Posted by Ravi Murugesan at 4:28 PM No comments:

Checking on participants falling behind in a course on Moodle

There are at least two ways to do this. Easy way first:

Access the list of participants through the Navigation block on the course homepage or the People block if it's there. Look for the option called "inactive for more than" at the top of the participant list. You'll see some time periods going back to the beginning of the course. I'm now helping run a course that started on 1 February, almost three weeks back, so I see the following options: 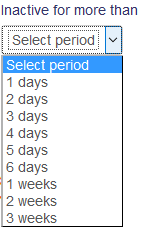 Select an appropriate value in the drop-down list, depending on what you think counts as active participation. Then scroll down, click "select all", and then click "send a message". 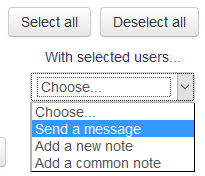 Then write your message for these participants who have fallen behind -- make it an encouraging one! I would say it's a good idea to remind stragglers through this approach only once, ideally a week or so after a course begins. Then it's up to them to decide whether to come back to the course. If you keep writing to the same group of people, they're likely to get annoyed.

But what if you want to closely track who has done what in the course and send reminders to specific people, instead of a catch-all "inactive for X time" criterion?

Then the activity completion report is your friend. This is easy to get started with but requires some spreadsheet analysis:

Click the “Reports” link in the course administration menu block on the left and click “Activity completion” – you’ll see a table with icons denoting who has completed which activity. At the bottom of this table you’ll see options to download the table as a spreadsheet. Download this (a CSV file) and first save it as an XLS or ODS file so that you can use it for analysis, eg, spotting participants who have not done specific things in the course or have fallen behind. (Of course for this you would need to have used activity completion settings for the different resources and activities.) Then you would need to collect those participants' email addresses from the same spreadsheet and email them. Again, it's important to strike the right balance: reminders that are encouraging and get some participants back on track (you can't hope to win over all of them) but don't end up reaching the same people again and again with little effect.
Posted by Ravi Murugesan at 6:08 PM No comments:

How to not misuse the Moodle trademark: Tips for freelancers and small companies

This page at moodle.com is quite clear about the Moodle trademark, but I guess many people have never seen it because it's over at moodle.com and not moodle.org, which is the default destination for Moodle users who're looking to download Moodle, chat on the community forums, read documentation, etc. Mary Cooch, a well-known Moodler, has written about her experiences with the Moodle trademark, and I've just written a somewhat preachy post about why misuse of the Moodle trademark is a problem. Forbes magazine says trademarks like Moodle and IKEA are the strongest kind of trademark, and I think this is another reason Moodle HQ is assertive about protecting the Moodle brand. But I bet this isn't easy as Moodle itself is free and open source software. Those with technical expertise can freely explore the inner workings of Moodle, become experts, and start selling services around Moodle!

So what do you do if you're a freelancer or small business owner who specializes in Moodle and you want to run your business without violating the Moodle trademark terms? This is something I've started to ponder about: although I have a full plate of Moodle work now, I am self-employed and I may want to sell services at some point in the future.

My suggestions for those who're in a situation similar to mine:

Why misuse of the Moodle trademark is a problem

Moodle is open source software. It's free for anyone to use in any way. It's licensed under the most permissive of software licenses: GNU GPL. However, the word "Moodle" is trademarked. The trademark terms are clearly explained here.

Basically, you can freely use Moodle and talk about what you've done on your Moodle sites, but if you're going to sell services related to Moodle (eg, running a business that provides Moodle support in some way), you've got to be careful. For one, you shouldn't explicitly call yourself a "Moodle consultant", "Moodle service provider", or something that overtly shows that you're selling Moodle services. UNLESS you are a Moodle Partner company or have received permission from Moodle headquarters. That's my understanding at least.

The Moodle company (or Moodle HQ) is funded mainly by Moodle Partners (and perhaps the Moodle User Association will make a sizable contribution in the future). If individuals and non-partner companies rampantly sell Moodle services, there's a threat to the business model that funds the development of Moodle.

I don't normally get this worked up about trademarks and licenses, but here we're talking about free software (free as in freedom, not just price) that's used around the world by people who don't have to pay a cent to the company that made the software and yet can use and customize it as they please. The free software we're talking about also concerns education: a basic human right, not something arcane. Moodle being free software for educators everywhere is precisely why people shouldn't get too commercial about using the Moodle trademark for business without being allowed to do so. Someone who doesn't respect the Moodle trademark might not care about the Moodle philosophy which is central to the effective use of Moodle.

If you're a freelancer or small business owner and you specialize in Moodle, you may be interested in my next post which has some tips on how to do business without violating the trademark terms.
Posted by Ravi Murugesan at 2:08 PM No comments:

Back from the first MoodleMoot in India

Just back from the first MoodleMoot in India, and here's my Storify of the event. And below is my personal highlight of the event: I gave a talk about course design, which was captured in this tweet.

Posted by Ravi Murugesan at 3:24 PM No comments:

Ravi Murugesan
I'm a Moodler at the International Network for Advancing Science and Policy, a charity based in Oxford, UK.